Why Gold – Easy Cash For Gold

Gold, Au, has long been prized for its beauty, resistance to chemical attack, and workability. Because it occurs as a native metal, has a relatively low melting point (1063 oC.), and is malleable, early man easily separated it from rock and cast or hammered it into beautiful designs. Gold serves as a monetary reserve and is used in jewelry, scientific apparatus, dentistry, and photographic processes.

Gold crystallizes in the cubic system, forming octahedral and dodecahedral crystals, often distorted into dendritic or leafy growths. Cubic crystals are rare. A soft metal (hardness 2.5-3), gold can be made harder by alloying it with copper, silver, and other metals. Most gold contains some silver. Pure gold is very dense, with a specific gravity of 19.3, decreasing to 15.6 as silver connate increases. Gold is the most malleable and ductile substance known. It can be flattened out to less than .00001 of an inch (less than .000065 cm) and a 1 oz. (28 gram) mass can stretch out to a distance of over 50 miles (75 kilometers). Gold is also one of the most resistant metals. It won’t tarnish, discolor, crumble, or be affected by most solvents. This adds on to the uniqueness of this mineral.

The mineral Gold is almost always mixed with a small amount of silver, and sometimes contains traces of copper and iron. A Gold nugget is usually 70 – 90 percent gold, and the remainder mostly silver. The color of pure Gold is bright golden yellow, but the greater the silver content, the whiter the color. Most Gold is mined from ore, containing tiny amounts of Gold in the ore. The ore is brown, iron-stained rock or massive white Quartz. To extract the gold, the ore is crushed, then the gold is separated from the ore by various methods. Gold is less commonly found as nuggets. Nuggets are formed when erosion causes a large piece of Gold to separate from its mother rock, and then gets carried away into a stream or river. The flowing water tumbles the Gold, giving each specimen a distinct shape. The Gold eventually settles at the bottom of the water, and due to its heaviness remains there. Other nuggets also get caught in the same area, forming a placer deposit. An even rarer form of Gold is as crystals, which are cubic, octahedral, and dodecahedral. Even when the Gold occurs in crystals, they are distorted or are almost microscopic. Although Gold is a rare mineral, it has many scattered occurrences. Most of these occurrences usually lack quality and quantity in regard to Gold. However, certain regions contribute greatly to the gold market. Some of the best known Gold producing regions are: California, Colorado, Ontario, Mexico, Australia, Hungary, and South Africa (the largest producer). Some famous American mines include the Empire Mine and Red Ledge Mine in Grass Valley (Nevada County), California. Very nice crystals and crusts have been found near Ouray, Ouray Co., and in Red Mountain Pass, San Juan Co., Colorado. The Hollinger mine, along with other mines in that area of the Porcupine District, have produced large amounts of Gold.
Gold Purity – Karats

Gold’s purity is measured in karats. The term “karat” harks back to the ancient bazaars where “carob” beans were used to weigh precious metals. 24 karat is pure gold, but its purity means it is more expensive and less durable than gold that is alloyed with other metals. Different alloys are used in jewelry for greater strength, durability and color range. The karatage of the jewelry will tell you what percentage of gold it contains: 24 karat is 100 percent, 18 karat is 75 percent, and 14 karat is 58 percent gold. When comparing gold jewelry, the higher the number of karats, the greater the value.

Karat marks: When buying gold jewelry, always look for the karat mark. All other things being equal, the higher the karat, the more expensive the piece. In the United States, 14-karat gold, or 583 parts pure gold, is the most common degree of fineness. Nothing less than 10 karats can legally be marked or sold as gold jewelry in the U.S. However, lower karatages, such as 8-karat gold and 9-karat gold, are popular in other countries.

18-karat gold is 18/24ths, or three-quarters pure gold, and jewelry of this fineness is marked 18k or 750, the European designation meaning 75% gold.

Always look for the karat mark or “k” that appears on the back of the piece. By U.S. law, if a karat mark appears you should also see the manufacturer’s trademark to assure you that the karat marking is accurate. The country of origin should also appear.

In addition to the karat mark, every piece of gold jewelry should be stamped with a hallmark or trademark of its maker, and sometimes its country of origin. These designations assure you that you are buying genuine karat gold jewelry. Heavier pieces contain more gold 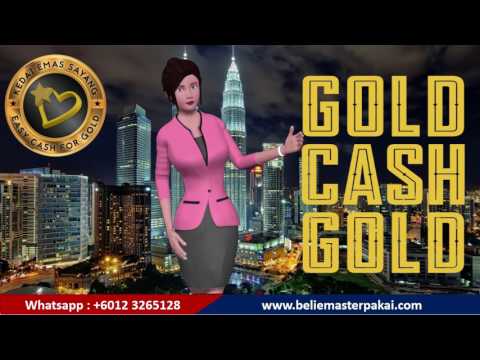